This post contains references to products from one or more of our advertisers. We may receive compensation when you click on links to those products. For an explanation of how we make money, visit this page.

This is a list of fish puns for you to enjoy.

This list of funny puns about all kinds of fish will leave you “smelt-ing” with laughter!

Two goldfish are in a tank. One says to the other, “how do you drive this thing?”

What did the goldfish say when he got fed? Tank poo 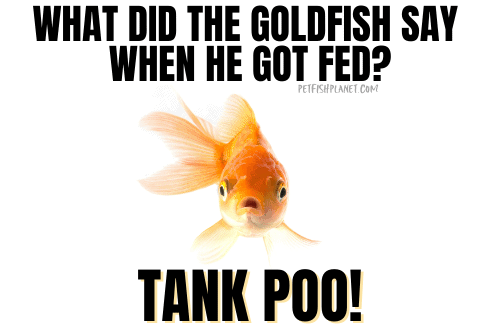 Which fish are the most valuable? “Gold”fish

Why are goldfish orange? The water made them rust

How do you make a goldfish age? Take out the G and Fish!

Where did the sick goldfish go for help? He went to the sturgeon

I saw a singing goldfish once in the Choral Reef. 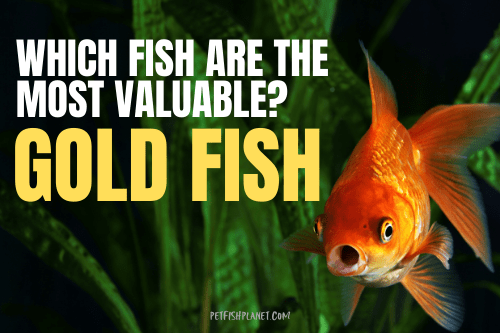 Did you hear about the goldfish who went bankrupt? Now he’s a bronze fish.

Where does a goldfish go on vacation? Around the globe.

Where does a goldfish keep its money? In the riverbank

What do sea monsters eat? Goldfish and ships.

Why did the fish pause mid-sentence? Because after three seconds he forgot what he was talking about.

Why will the goldfish never take responsibility? Because it’s always salmon else’s fault.

Why do goldfish always lose their court cases? Because they always look so gill-ty.

How do goldfish keep up to date? They surf the web for the “current” news.

What do you call a jellyfish on a plane? A flightoplankton

I don’t think you’re ready for this jelly.

The jellyfish caught in a net found himself in a jam.

Why did the jellyfish get bad grades? It was below sea level 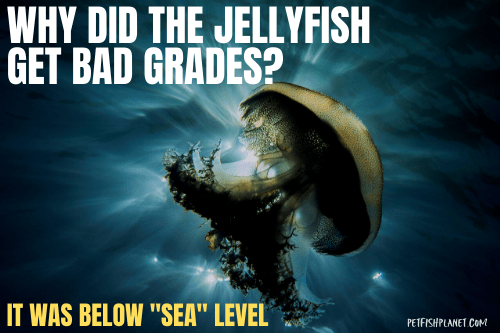 Why did the jellyfish blush? He saw the boat’s bottom

What’s in the middle of a jellyfish? A jelly button

I want to tell a jellyfish joke but too spineless

Have you heard the one about the jellyfish? It’s a no brainer

What would you call a jellyfish combat veteran? A man o war 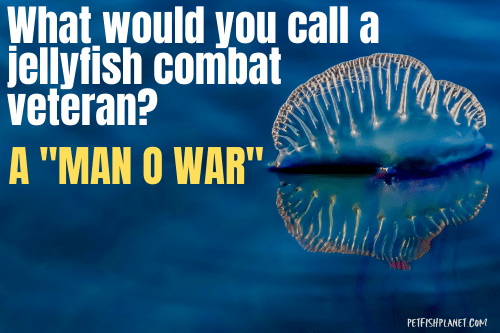 The jellyfish have no structure in their lives, make no bones about it.

The jellyfish who became a private investigator suspected everyone because he thought they all smelled fishy.

Pockets are useless to jellyfish, you can see right through them.

I love jellyfish, I just can’t get over how stingin cute they are

I was surprised by the jellyfish’s temper, how shocking

That jar of spicy jelly had a reel bite to it

Why do jellyfish live in saltwater? Pepper makes them sneeze.

Don’t be koi about it

What do you call a fake koi fish? A dekoi 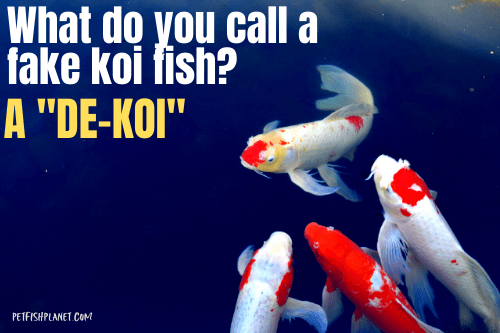 Have you ever met a shy fish? They are very koi

Why was the fish so bashful around his crush? He was feeling koi.

How do koi fish make decisions? The flip of a koin

How do koi fish prefer their submarine? Made with koil and vinegar 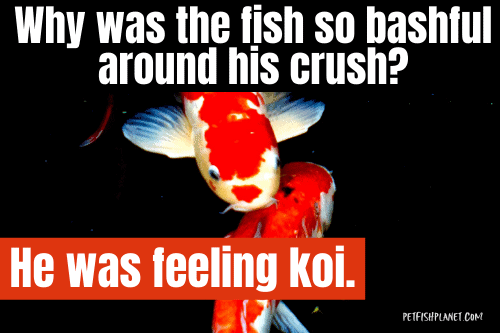 What do you get when you cross a koi fish and an elephant? Swimming trunks.

Where do koi fish go to do yoga? The river bend

Where do koi fish take a bath? In a river basin

The kois and gills did swimmingly in school

Why is it that koi fish never go to war? Because they are paci-fish-ts.

Why do koi fish have troubled relationships? They are scared of intima-sea.

I’ve been herring rumours around town that you like me

Im so pollocky(lucky) to have you 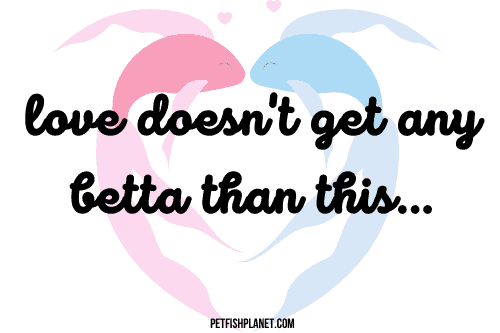 I fish upon a star

I’m fin love with you

Love doesn’t get any betta than this

Salmon had to say it 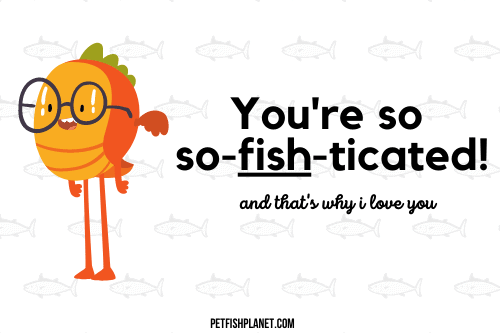 Your plaice or mine?

You are my sole mate

Let’s go out, just for the halibut

Fish you were here

I never manta hurt you

We are simply in too deep.

What is the fastest fish in the ocean? The one who got away.

I’d be love cichlid if you left me

Now that I’ve found you, I’m not lonely a nemo

You make me happy as happy clam be

You give me porpoise

Which day do catfish hate? Fry-day! 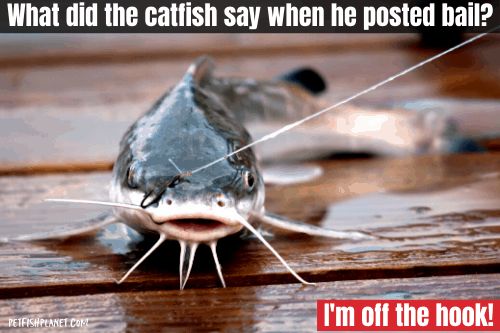 What did the catfish say when he posted bail? “I’m off the hook!”

Why don’t catfish pass their exams? Because they work below C-Level.

Why don’t catfish like basketball? Cause they’re afraid of the net

What party game do catfish like to play? Salmon Says.

Once that huge catfish got caught on the line, the jig was up.

Why do catfish swim in schools? Because they can’t walk.

I have so much grati-tuna!

Thanks for the great oppor-tuna-ty!

Thanks from the bottom of my carp 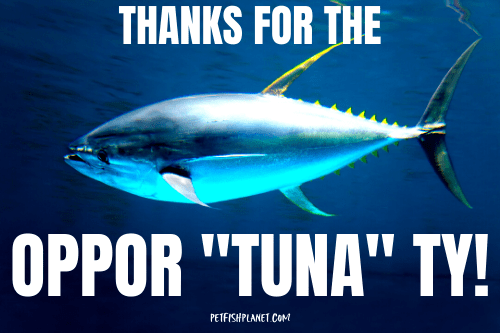 You’ve always had so much codfidence in me

It doesn’t get any betta than this.

You are a cod sent

Tang you so much!

Tanks for your kelp! 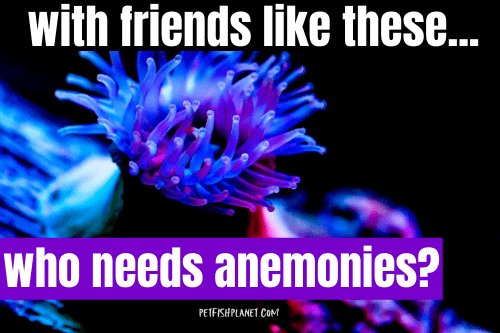 What a re-reef to have you

You’ve been a reely big kelp

I cod not have done it without you

Tanks coral (for all) you do

I canth thank you enough

Let minnow how I can return the favor

Tanks to you we reached our goal fish 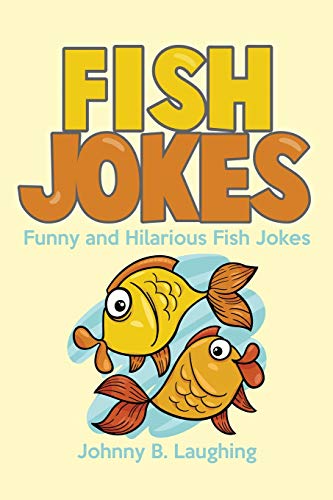 If you’re looking for even MORE clever fish puns, jokes and one-liners, check out this book!

You don’t want to miss out on the “oppor tuna ty.”

Tank You for reading! 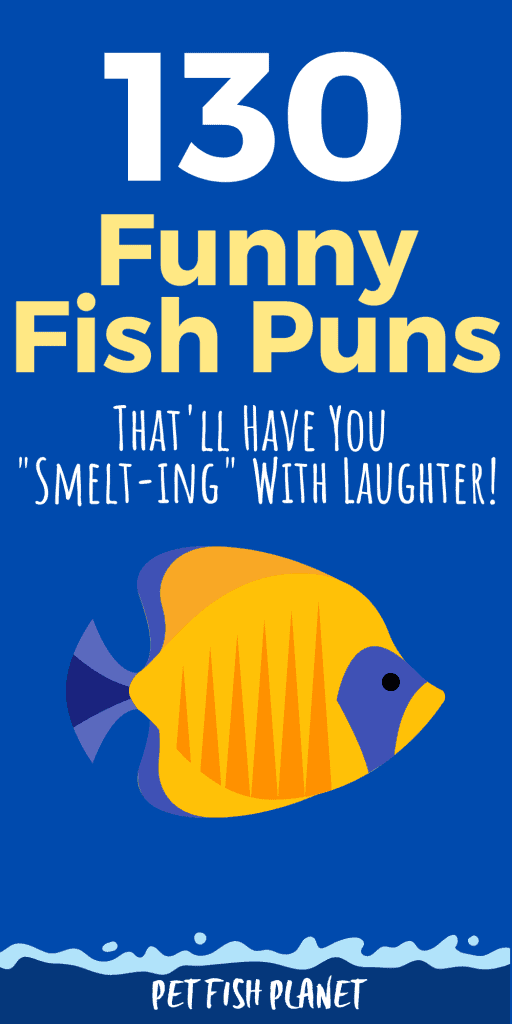